Today, the price of thermal cameras has decreased substantially while performance continues to improve. As a result, less critical sites are also adopting thermal systems for perimeter protection and other uses. These sites employ thermal imagers as an early warning system that can detect a rapid temperature increase over a short time that could be indicative of fire. Fire can destroy multiple buildings or installations within an extremely short time. The value of the goods destroyed during a fire can be tremendous, and the cost of a life that is lost during a fire is impossible to calculate. With their non-contact method of measuring temperatures, thermal imaging cameras can detect fires by using smoke detection or hot spot trace functions.

With built-in temperature functionality, the camera can detect a significant rise in temperature over a short time and issue an alarm even at long distances. Today’s thermal cameras with their high sensitivity to temperature fluctuations provide higher detection accuracy than standard cameras, making them particularly fit for applications such as forests, warehouse complexes, and industrial areas. Typical examples include storage of splint wood, batteries, waste recycling materials, and coal. What these applications have in common is a fundamental need to detect hot spots and detect a fire at the early stages to help prevent significant losses.

Today’s thermal imagers use an uncooled Vanadium Oxide (VOx) sensor that delivers higher thermal sensitivity in a more compact and cost-effective package. Vanadium Oxide cameras are also more reliable, as compared to other thermal imaging technologies, due to fewer moving parts. The VOx detector offers high thermal sensitivity (≤ 50 mK) that allows thermal cameras to distinguish among objects in a scene with minimal temperature differences. The camera captures detailed images where thermal contrast between object and background is minimal.

This sensitivity to detect rapid temperature rises at distances of almost 200 feet (using a 7 mm fixed thermal lens) allows a camera to recognize, for example, when a person uses a lighter or smokes a cigarette, which is especially useful in highly flammable environments where one spark could quickly ignite a fire. The rapid detection capability coupled with built-in speakers and illuminators offers a complete early warning system to avoid a potential fire before it starts.

Thermal cameras, however, do not produce usable identification-level images, especially compared to detailed color images offered by today’s visible-light cameras. While all thermal imaging cameras contain an infrared sensor to detect infrared wavelengths, many also incorporate a visible-light CMOS sensor that creates a normal color image. The camera then superimposes the visible-light image over the infrared image, providing more context and detail to the infrared image. These hybrid thermal cameras – a single device that incorporates a thermal and visible-light imager into one housing – address many of the safety and security challenges for locations that are otherwise difficult to monitor.

Fuel and Chemical Manufacture and Storage

Fuel and chemical manufacture and storage is extremely hazardous due to the highly flammable nature of the products. A spark from a lighter or from a lit cigarette can quickly lead to a severe fire and cause catastrophic loss of life and assets. 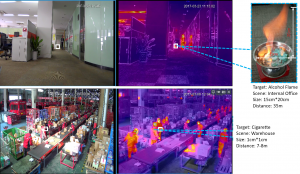 Waste is another potentially flammable material, especially when stored in large piles indoors. Self-combustion, heat development due to pressure, spontaneous chemical reactions between disposals and methane gas-buildup are all potential fire hazards. Thermal imaging cameras can help prevent fires by identifying hot spots with the potential to flare up.

Thermal imaging cameras are today being used for a wide variety of applications. Thanks to their ability to measure temperatures in a non-contact mode, many sites employ thermal cameras as a crucial part of a complete early warning system to help detect fires. Any industry that stores combustible or flammable materials, any environment where flammable gases are present, and many other settings where fires can start will benefit from a thermal camera that offers rapid temperature rise detection.