Located in New Brunswick, The Great Northern Auction (TGNA) is the largest public automobile auction of its kind in Eastern Canada. Founded in 2001 out of a mobile trailer, the business has grown considerably over the years and now operates from state-of-the-art facilities situated on 50+ acres of land. TGNA boasts the fastest growing dealer auction in Canada, the fastest growing customer base and quite possibly the highest percentage of cars sold anywhere, each week.

TGNA live auctions approximately 10,000 vehicles each year. Because of the need to protect its large car inventory, the company required a cost-effective means to mitigate the loss of catalytic converters and other auto parts due to a high theft rate on its compound. After-hours monitoring and dispatch service was also sorely needed to thwart unauthorized personnel from gaining access to the grounds.

Locally owned Centurion Alarm & Lock was brought in to solve TGNA’s considerable security needs. The project required video technology for full perimeter protection across great distances, with a limited number of cameras that could produce great picture clarity and resolution. An emphasis on minimizing false alarms was paramount, as was the ability to connect to a monitoring station to deliver live feeds and for backup storage if needed.

“The primary goal for the customer was to plug the hole of loss as much as possible,” Steeves says. “They were having repeated acts of vandalism to their physical chain link fence, followed by intrusion into the compound and damage to the vehicles stored there. They were losing thousands of dollars each month.”

The DH-TPC-DF1241N thermal network camera combines an uncooled VOx 256 x 192 thermal imager with a 4MP visible-light sensor for cost-effective, long-range surveillance in a rugged all-in-one package. The thermal imager coupled with an athermalized, focus-free lens produces crisp images in total darkness and sees through rain, fog and snow. The visible imager with an IR illuminator delivers superior video in any lighting condition. The built-in Fire Detection and Smoking Detection features can identify a potential issue and deliver audible and visual alerts. In this way, Dahua’s hybrid thermal cameras allow TGNA see the visible and the invisible.

“The largest benefit of Dahua’s all-in-one solution is the savings in cost to the customer,” Steeves says. “If we were to do cameras that do AI detection poorly and notify all the time falsely, the solution would not be effective. If we were not able to remotely link the alarms to a third-party operator, it would only be a half solution.”

“Dahua’s dual lens thermal IP cameras with analytic line crossing technology was the most impressive part of the installation,” Steeves comments. “It leverages AI technology to recognize a human or vehicle violating a protected area, notifying an operator in real-time to dispatch a security guard in a timely manner.”

A side-by-side visual comparison of Dahua’s affordable dual visible/thermal camera on the grounds at TGNA.

The ability to cover TGNA’s expansive grounds with few cameras was made possible, in part, by utilizing Dahua’s PTP and PTMP wireless links. The DH-PFWB5-90n offers a 5GHz base station that delivers high-performance and stable operation. The product combines an advanced radio core containing MIMO 2 x 2 technology with an integrated, high-gain, dual polarization directional antenna. 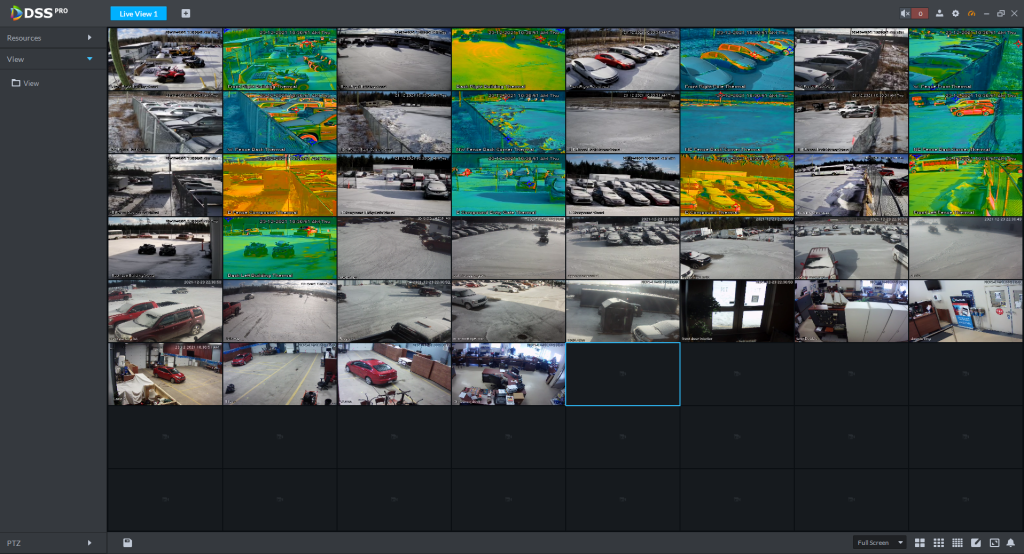 “All camera systems have an intended application. If you have cameras and an individual trespasses, damages property, etc., without the connection to Maximum Video Monitoring, the end user still only finds out the next morning,” Steeves explains. “It would be another ‘after-the-fact’ solution. Utilizing the monitoring station, we are using real-time dispatching to deter crime from taking place.”

The affordable all-one-solution by Dahua puts TGNA on the forefront of a rising video verification trend.

“I believe the camera monitoring trend will grow over time,” Steeves adds. “It may be a higher cost solution than internal burglar alarms that are monitored, but far more effective.”